With the summer slowly coming to an end (I know, I can’t believe I am even saying that!), vacation time being completely used up and a regular life schedule starting back up, what a great time to get involved with our personalized 431 Health Program!!!

We introduced this program back in June, and have seen some UNBELIEVABLE results!!! 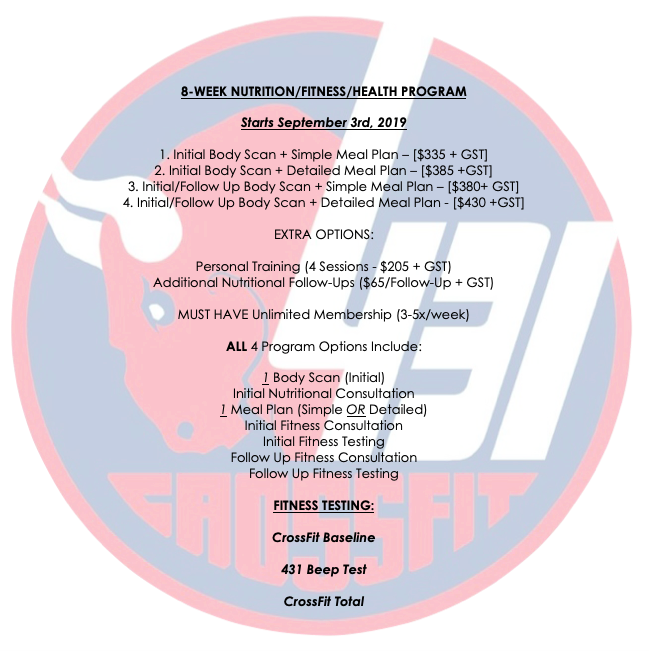 “I was actually really excited to try and start the program because I know I’m not very knowledgeable in the nutrition aspect of it all. I would say that I probably didn’t expect it to be as hard as I thought it would be. Granted I did do it in the summer so it was hard not to go out. But it’s great because it was flexible enough that you can still go out and eat every now and again and still accomplish your goal. I mean the end goal is to incorporate it in my daily lifestyle.

The hardest thing is the first week when my body is just adjusting to eat and I felt hungry/just wanted to eat junk food. But I just stuck to it and it became easier and I eventually formed a routine. The next hurdle was meal prep!! The amount of time that goes into is crazy but talking with the dietician, I was able to make meals that only requires a few ingredients and maybe 15-20 prep which was awesome and a lot more doable.

Lastly, once I started seeing the result, I became more and more motivated. Of course there were some bad weeks where I ate out 4/7 days just because of commitments (birthday, wedding, etc). But as long as you don’t let it become an everyday thing then it’s fine. I also learned to adjust the food I eat accordingly if I want to eat out (by talking with the dietician).”

“I signed up for the nutrition program with the goal of losing weight while gaining muscle mass. I wanted a nutrition plan that I could maintain long term and allowed flexibility. Tenille was able to answer any questions that popped up along the way and adjusted my meal plan when I was struggling with hunger in the first few weeks. The body scan was so beneficial to the whole process as it showed me which areas I could build more muscle and Meg was able to give an in-depth explanation of the results. The first phase of testing allowed me to set goals and Jeff set me up with a plan of how the achieve them. The changes to my diet allowed me to see the full extent that nutrition affects my workouts and overall daily life. The health program has taught me how to incorporate balanced meals in moderation along with diversifying my workouts. I have never felt more fit or as energetic as I do right now in my life and I owe the majority of that to the health program!”

“First and foremost, I felt like the perimeters for this program were clearly laid out from day one. For an individual who is looking to just put in the work and have all the thinking towards your individual fitness and health goals taken care of; this program is for you.

My initial goal was to lose 25lbs. In the first 7 weeks of the program, I had lost 27lbs. I had approached Jeff and Tenille about rebuilding my plan after achieving my initial goal 5 weeks early.  They were quick to construct a new plan and help me to facilitate it. I’m noticed a complete change in my physical appearance, fitness, sleeping, and overall demeanour.

Tenille’s meal plan’s were fantastic and delicious. It was a big change from my prior eating arrangements in the sense it seemed costly and getting into a fashion of preparing my meals over a Sunday afternoon was time I had to plan for. In retrospect, the money I saved from eating out excessively in my busy schedule was allocated to that cost (I might have even saved a bit from month to month). I was noticing some dizziness with the caloric deficit, Tenille quickly adjusted my eating plan to help me transition into her original plan. It really is a matter of getting to know how each other work through meetings and communication over the weeks.

Jeff’s contributions were far more important then I initially anticipated. I’ve done CrossFit for 2 years and had been attending 431 for approximately 8 months when the plan started. The consultations were important and helped me to visualize my exact goals in the long term. With the time to communicate these goals, he was better able to assist me in classes and help me plan which workouts were of the utmost use to me over the course of the weeks. I battled a lot of headspace challenges throughout the weeks, his encouragement and focus helped me to stay on track on the days I battled myself. I wouldn’t have made it to where I am without his patience and guidance.

I would gladly revisit this program in the future and have recommended it to many of my friends.”

“The health program initially pulled me in mostly for the nutrition planning side of things because while I attended the gym regularly, I had about 10lbs I wanted to lose and I knew my eating habits were the main culprit.

I’m the type of person who likes to have a plan to refer to so I can keep focused and this program definitely gave me that.  From the initial scan/fitness test to sitting down with Tenille, it helped me to boil down and focus on the things that would give me the best chance of not only making a change (especially at the outset when trying to break the bad habits), but also sticking to it and being able to maintain it in the long term.

Initially the eating plan was the most difficult thing to stick to but I took the meal plans and followed them religiously for the first couple of weeks because it allowed me to not have to think about what I had to make/buy.  Holding back from the temptations that got me to where I was before very difficult at first.  As the summer wore on and I could feel my habits changing for the better I started to deviate from the meal plans and allowed myself some indulgences here and there and used the meal plans more as a guideline than something to follow to a T… life happens and you need to be somewhat flexible.

On the training side of things a busy summer schedule has made it difficult to attend the gym quite as regularly as I would have liked but that is life.  Jeff was his usual self and helped to motivate and keep me focused on when I was able to attend, most specifically only my lifting goals and assisting my goal of my first muscle up… something he’s been very patient and encouraging with.

This program allowed me to make many positive changes to not only my nutrition but my overall life balance.  For me it accomplished exactly what it set out from the beginning… not focusing on a specific period of time or a specific weight loss goal but changes that would stick with me for the long term.  For anyone considering something like this I’d highly recommend it.”